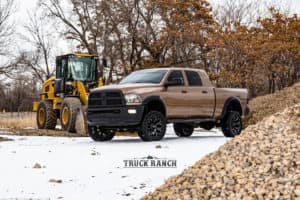 At Truck Ranch we go through great lengths to make sure our customers are SATISFIED. We achieve this by treating our customers as a members of our #truckranchfamily.

We wanted to share this post we received on on our Facebook wall from John J and feel it describes this exact sentiment. We appreciate you John for sharing!

“I began looking for a truck in September and after much research and debating, I decided on a Ram 3500 Megacab. Now that I decided what vehicle I wanted; it was time to find the right one. I looked for several weeks and finally found what looked to be the perfect truck; a Ram 3500 Megacab with all the extras. One problem, I am in Oregon and the truck is at Truck Ranch in Logan, Utah 750 miles away.

I have always been leery of used car lots as it typically doesn’t go how you planned whether it be finding out the vehicle has problems, or the price doesn’t get to where you think it should be OR both. I was already reluctant, add in the lot was 750 miles away….but the truck was perfect. I decided to reach out to them and spoke with Greg Titus. Greg was extremely helpful and very patient with me as I had lots of questions and I had to depend on him texting me pictures and videos in order to “see” the truck. He was honest and thorough during the entire deal. I decided to roll the dice and buy the truck at their asking price even though I had never laid eyes on it much less driven it.

They agreed to ship the truck to their lot in Oregon, which is about 30 minutes from me. Several days later the truck arrived and it looked and drove far better than I expected. It was perfect in every way….almost. I took the truck to my mechanic and he pointed out a couple of things he thought may have been “deal breakers” had he inspected the truck prior to me buying it. I called Greg on the phone and explained what I had learned. Greg told me he would talk to his boss, Jase Hill, and get back to me. Honestly, I was sick to my stomach and felt like I had made a big mistake. Jase called me back shortly thereafter and told me he would do what it took to make things right and offered to pay for the repairs I had mentioned. The repairs were completed and Jase took care of the bill just as he had assured me.

Jase and Greg went above and beyond with my buying experience and I must say they changed the way I feel about buying a used vehicle. They were professional, polite, honest and enthusiastic about the entire transaction and their follow through was the most impressive. I HIGHLY recommend Truck Ranch if you want a high end, solid truck and if you want to deal with trustworthy, honorable professionals. Jase and Greg thank you very much for your help and for making this transaction feel good. I love the truck and will absolutely buy from Truck Ranch again.” – John J.