**CLEAN TITLE/NO ACCIDENTS** 3.5L V6 Ecoboost Paired with a 10-Speed Automatic, SYNC, Equipment Group 301A, Rear View Camera w/Dynamic Hitch Assist, 18" Chrome-Like PVD, 4WD, 6 Speakers, Rear Back Up Camera, and Many More Options!! Come Stop By Or Call Us To Schedule Your Test Drive Today! SE HABLA ESPANOL!!! Along with many extended warranty options and accessories, and we ACCEPT TRADES. We make the buying experience painless and pleasant with our no haggle pricing. We give you our best pricing upfront with all our prices clearly labeled on each vehicle. It is our PROMISE TO YOU, you will never pay too much at Truck Ranch. Better Service, Better Prices, Better Trucks!!!

Model Overview
The 2017 F-150 has to be many things to many people. From work truck to cruiser, off-road vehicle to boat hauler, there is an F-150 for virtually every task. As a result, the lineup is diverse. There are four engines available on the F-150, six trims, and several body options.
The most basic engine is a 3.5L V6, which produces 283 horsepower and 255 pound-feet of torque, allowing for a tow rating of 7,600 pounds, which bests other competitors when equipped with their basic V6 engines. The next step up is a 2.7L turbocharged V6 that makes 325 horsepower and 355 pound-feet of torque. A bigger 3.5L turbocharged V6 makes 375 horsepower and 470 pound-feet of torque, helping the F-150 rate a class-leading towing spec of 12,200 pounds. The top-of-the-line 5.0L V8 makes 385 horsepower.

Trims include XL, XLT, Lariat, King Ranch, Platinum and Limited. The basic XL trim is available with three different cab sizes and three different bed lengths in either 2WD or 4WD configurations. Owing to its work-truck pretensions, the XL is relatively light on bells and whistles, with just basic utilities like an AM/FM radio and a 4.2-inch screen in the center stack.

The Platinum version is the urban cousin to the King Ranch trim. Like the King Ranch, it's only available with a crew cab and the 5.0L V8. It also features a voice-activated navigation system, unique 20-inch polished aluminum wheels, LED side mirror spotlights, power deployable running boards, aluminum interior trim and a leather wrapped and heated steering wheel.

Finally, the Limited trim rides on 22-inch wheels and makes standard a whole range of convenience items that are optional on lesser trims. These include a 360-degree camera with split-view display, remote tailgate release, a twin-panel moonroof, and more. 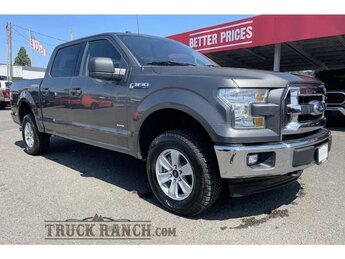